You can see my animation for sidordentligt.dk here: http://pensel.deviantart.com/#/d3isz88
I know it's pretty big, but I don't know how to fix it...
But enjoy, and while you're there you can check out my other stuff in there :)
By Kramme No comments:

Hey all!
It's been a bit since I posted last. I've been very busy in school the last few weeks - but some awesome things came out of it. I'll try to show you as much of it as possible! At school we mixed up with the film people, photographers and webbers to make and advertising company. Ours was called Parashoot.
Here are some of the things we did:
Jane and I made the homepage for the firm: http://jlangkilde.dk/hjemmeside.swf
I did a poster and a film for another company(the film will be up here later) : 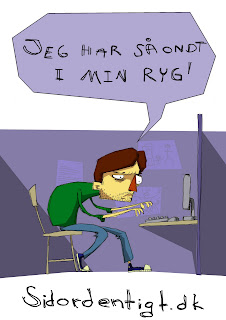 I got the idea for this ad and helped edit it:

I think that will be it for now, but I'll scoop up some more of my Parashoot-work + I'll do some scans of my sketchbooks so you'll be able to see what I've been doing lately.